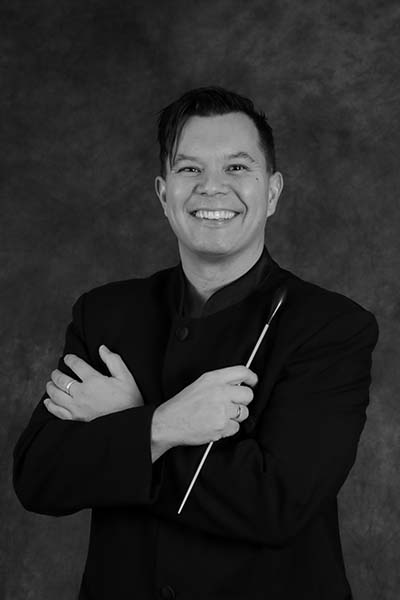 Dr. Jon Noworyta is Assistant Professor of Music and Director of Bands, Instrumental Activities, and Outreach at the University of Indianapolis, where he administers all aspects of the instrumental area, conducts the Symphonic Wind Ensemble and Pep Band, and teaches courses in conducting and music education. A versatile conductor who is equally comfortable with orchestras as well as wind and brass groups, he is the Artistic Director of the Queen City Freedom Band of Cincinnati, Assistant Conductor of the Cincinnati Chamber Orchestra, and Director of the Crossroads Brassband of Franklin, Indiana; ensembles he works with in addition to his duties at UIndy.

As a brass band conductor, Noworyta has led the Fillmore Philharmonic Brass (2017) and served as the Music Director of the Cincinnati Brass Band (2018 – 2020), leading both groups in award winning competitive seasons. These include top three placement of both groups in the Second Section at the North American Brass Band Association Championships in successive years. Noworyta currently serves on the NABBA committee for Equity and Inclusion.

Noworyta is a twenty-one year veteran public school music educator. As the former Director of Bands at Wheaton (IL) North High School, he directed the band program (concert, marching, and jazz) and taught music technology and music theory. Previous positions included those at Naperville North High School and in the North Tonawanda (NY) City Schools. Ensembles under his direction have performed at local, state, national, and international venues most notably Carnegie Hall, where the Wheaton North Wind Ensemble was invited in 2009. The Wheaton North Wind Ensemble also appeared at the 2010 Midwest Band and Orchestra Clinic (rehearsal lab) and the 2013 Music for All National Concert Band Festival. Noworyta has led groups at the Rock and Roll Hall of Fame, Chicago’s Symphony Center, the Kennedy Center, and Carnegie Hall.

Throughout his career, Noworyta has collaborated with members of the Buffalo and Dayton philharmonics, the Elgin, Knoxville, and Indianapolis symphonies, the Cincinnati Chamber Orchestra, and the Cleveland Orchestra. Noworyta has also collaborated with world-renowned pianist James Tocco two times, performing the music of George Gershwin and David Maslanka. His work has won Noworyta the praise of such influential composers as Leslie Adams, Jennifer Higdon, Karel Husa, Timothy Mahr, David Maslanka, Robert Sheldon, and Charles Rochester Young as well as conductors Harry Begian and Arnald Gabriel.

Noworyta’s professional affiliations have included the NAFME, CBDNA, WASBE, NBA, NABBA, PBA, GLSEN, the Conductors Guild, and the Indiana, Illinois, and Ohio Music Educators Associations. He currently sits on the Committee for Diversity, Equality, and Inclusion for the North American Brass Band Association, is listed among the Who’s Who in America Educator’s Edition, and is on the administrative team for the 29,000+ member “Band  Director” Facebook group. He was the 2012-13 Distinguished High School Teacher in Wheaton-Warrenville School District 200 and is a member of the Fine and Performing Arts Wall of Fame at North Tonawanda High School (his alma mater). Noworyta shared his personal-professional story in “Out In Front: Queer Identity and Visibility in the Wind Band,” a compilation of queer career and coming out stories included in the recent GIA publication The Horizon Leans Forward… stories of courage, strength, and triumph of underrepresented communities in the wind band field by Erik Kar Jun Leung.

A Western New York native, Noworyta holds degrees from Baldwin-Wallace College (BME) and Northwestern University (MM), and the College-Conservatory of Music of the University of Cincinnati (DMA) where he studied wind conducting with Dr. Terence Milligan and Dr. Glenn Price and orchestral conducting with Aik Khai Pung. Additional study as a participant in conducting workshops at the Eastman School of Music, the New England Conservatory, and the Juilliard School, has given Noworyta the opportunity to work with the major conducting pedagogues in the field today.

There are no upcoming events.